The chance to do some fly fishing and meeting some friendly Aussies attracted Jill and Alex to Tasmania where they are grading potatoes to qualify for a second-year visa.

When young American couple Jill Decker and Alex Sonnenberg decided they wanted to travel overseas for a working holiday they discussed where they should go. While in Alaska indulging in their passion for fly fishing they decided that New Zealand would be a similar place to try with their rods and lines so they headed off.

Staying in ‘the land of the long white cloud’ for around a year was a positive experience. While there, they not only met lots of Kiwis, but also many travelling Aussies. This enticed them to look across the Tasman at our wide brown land, something they had not considered previously.

The well-known Working Holiday (417) visa is not available to young Americans but they do have access to the Work and Holiday (462) visa. This allows citizens of the USA a similar backpacker experience to those from Europe, South Korea, Japan and Canada who use the now traditional Working Holiday visa option.

Changes to the Work and Holiday visa only in November 2018 now allow US citizens to stay a second year by doing farm work in regional locations right across the country, not just in the north like previously. Alex and Jill decided that was their best option.

A road trip seems compulsory in Australia, so shortly after hitting our shores on Boxing Day 2018 they headed down the south coast of NSW, calling into our national capital along the way.

These guys are smart and realised that in a country this size you need a car to get around, so that purchase was made shortly after arrival. Being from the States perhaps they had more idea of the size of our country than many of our young European or Asian travellers.

Melbourne was their planned destination, in time to witness the Australian Tennis Open. With that event ticked off the list future travelling plans were then researched. Tasmania beckoned because it boasts quality fly fishing, so they boarded the ferry across Bass Strait.

Enjoying their travel experience and already impressed with Australia, the US couple decided they may as well take advantage of the second-year visa option. Once earned, they could choose later whether to stay longer or not, but best to qualify early and get that obligation out of the way.

While travelling they had done quite a lot of unpaid volunteer work in exchange for board and lodgings. Because they had done their research they realised only paid employment qualified for the 88 days of work needed for a second-year visa.

Alex worked as a chef in the States and Jill has a Bachelor of Anthropology, but they needed to find work that qualified for the second year. Farm work was familiar to them because they were both from rural areas and they knew that work was eligible, so they sought out the options.

Trying to find good information and contacts from random websites did not prove to be very productive and Alex and Jill were wary of the risks of paying out money online.

Being social media users, they were in contact with many other young travellers in their situation and the government funded National Harvest Labour Information Service was recommended, in particular the Harvest Trail website. They checked out vacancies listed on the website and called the 1800 number to speak with staff in the Call Centre.  Pleased this option was risk free because it did not cost them anything, they were surprised to be given three different options of farms currently looking for workers.

Although the American backpackers had no knowledge about potato growing, Steven and Sharon Eyles in northern Tasmania were happy to teach them. Their farm grows vegetables including spuds, and they also harvest potatoes under contract for other farms. The Eyles are experienced with working with backpackers and regularly list vacancies on the Harvest Trail website to entice the people they needed.

Jill and Alex immediately hit it off with the Tassie farming family and working with them has proved to be a positive experience. They not only work together but have socialised as well, sharing some family meals. A nearby farmhouse owned by the Eyles was available to rent which worked out well.

Alex and Jill replaced some previous backpackers who had moved on, so the season was well under way when they arrived. They will have completed only around six weeks of work by the time the harvest is finished but close to half of their requirement to qualify for the second-year visa will have been achieved. They will then seek out another farm to build on the working days already attained.

Planning the next stage

After their experience first time around, another visit to the Harvest Trail website and contact with the Call Centre will now be their first option.

The couple are used to cold winters so the Tasmanian version doesn’t faze them, but the island state won’t be able to provide as many farm work options as warmer parts of Australia during this period. Grape vine pruning and some vegetable planting will be happening in Tassie, but much of this is performed by regular local workers and out-of-area labour is not really in demand.

Whether to stay in Tasmania, maybe try the fly fishing that enticed them initially, or move on to experience other parts of our continent, was still to be decided while the potato season wound down. One part of the plan though was to seek more farm work soon. Apart from providing cash to live on and the cultural exchange, which was being enjoyed, qualifying for the second year early would provide peace of mind.

Being organised like Jill and Alex is a good example to others undertaking a working holiday in Australia. Buying a car, qualifying for a second year early in their visit, and tapping into social media for advice from others indicates a couple of smart operators. Now that they have discovered the Harvest Trail website and the government funded resources it offers, the rest of their stay in Australia is likely to be even more enjoyable and productive. 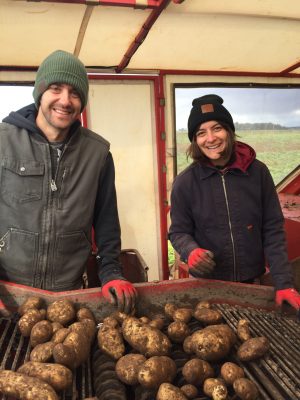