While there are temporary shortages of workers in some regions during peak harvest periods, MADEC says that the total working hours contributed by visiting seasonal farm workers for horticulture is at an all time high.

“But there are workers available if you know where to look and commit to paying them fairly.”

Major sources of seasonal workers are from backpackers on ‘Work and Holiday’ (462) and ‘Working Holiday’ (417) visas doing rural work to secure a second-year visa, and people on Seasonal Worker Programme visas. Australian residents also contribute to the pool.

“The full time equivalent (FTE) number of people available to do seasonal rural work on these three visas combined is the highest it has ever been,” said Mr Angel.

“MADEC sees the challenge is to ensure growers are connected with all these available workers at the right times to fill seasonal work vacancies – not a shortage of workers per se.”

The big increase in workers has been in the number of Seasonal Worker Programme visas granted, which has close to doubled every two years since the programme was piloted in 2009 and fully introduced in 2012.

Up until 5 November 2018, people on Seasonal Worker Programme visas could work up to six months in rural Australia. They can now work up to nine months – adding to the labour pool.

The most popular way that backpackers on ‘Work and Holiday’ and ‘Working Holiday’ visas can get a second-year visa is to do at least ‘88 days’ (3 months) regional farm work. From 1 July 2019, they may stay for a third year if they do an additional six months of horticulture work in regional areas. Another significant boost to the labour pool.

“While these figures don’t show the whole picture – they are a very useful indicator,” said Mr Angel.

“Some large-scale growers with a strong online presence tell me they get too many people applying for their seasonal jobs, so they refer workers on to smaller growers who don’t have such resources.

“For most of the time, growers who know where to source labour, are prepared to pay correct award wages or fair piece rates, and treat workers well, will almost always find sufficient, committed, motivated workers.”

The National Harvest Labour Information Service (NHLIS) comprising a website (Harvest Trail), call centre and Harvest Guide helps connect growers with workers. It is a no-cost service that is funded through the Australian Government and managed by MADEC, a not-for-profit organisation. 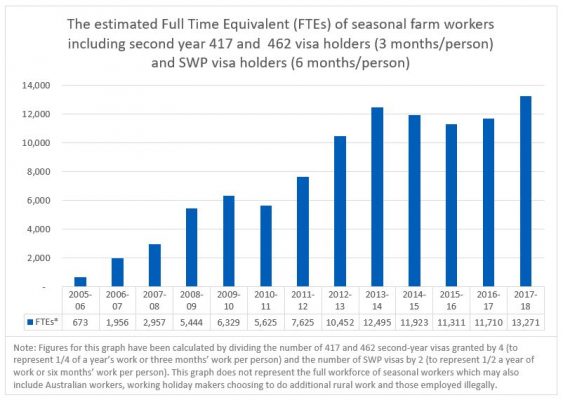